~ Why Romantic Suspense Is the Swaggiest of all Genres~

Simple. Romantic suspense gets your heart pumping in two different ways. You’ve got the flush of a newfound love, coupled with the adrenaline rush of danger. The two just seem to go hand in hand. After all, there is a degree of anxiety inherent in a budding romance. Is he feeling the same things I am? Am I reading his signals right? What if I make a fool out of myself, put my heart out there and have it rejected? And there’s a hint of romance innate in two people taking on the bad guys. Us against them. And face it, when we’re in trouble, we want to draw close to someone for security. In thrillers, physically, couples often are huddled together in tight spaces, hiding out from their foes.  I love it!

I love it so much I tend to include a lot of it in my writing. Most of my books are not outright romantic suspense, but I almost always include a little bit of action—someone with a gun, or sword—threatening the happiness of my young couple. But my last two releases most closely follow the traditional set up of a romantic suspense novel. UPON A MIDNIGHT CLEAR, my November release, brings together a Mall Santa/EMT with the widow whose little girl sat on his lap and asked for a Daddy for Christmas.  Talk about an obliging Santa!

And my newest release, BETWEEN ROCK AND A HARD PLACE starts with a body. The body of rock star Jasmine Barrett’s best friend, found murdered in the singer’s bed. When Detective Heath “Hawk” McGowan shows up to interview Jazz, he finds he is sympathetic toward her. When the bodies start to pile up, terror drives Jasmine into Hawk’s strong arms.

Yes, I love my job! Here’s a blurb and excerpt. And don’t forget to enter my Rafflecopter giveaway to win an e-copy of the first book in my ROCKING ROMANCE COLLECTION, TRAPPED UNDER ICE! 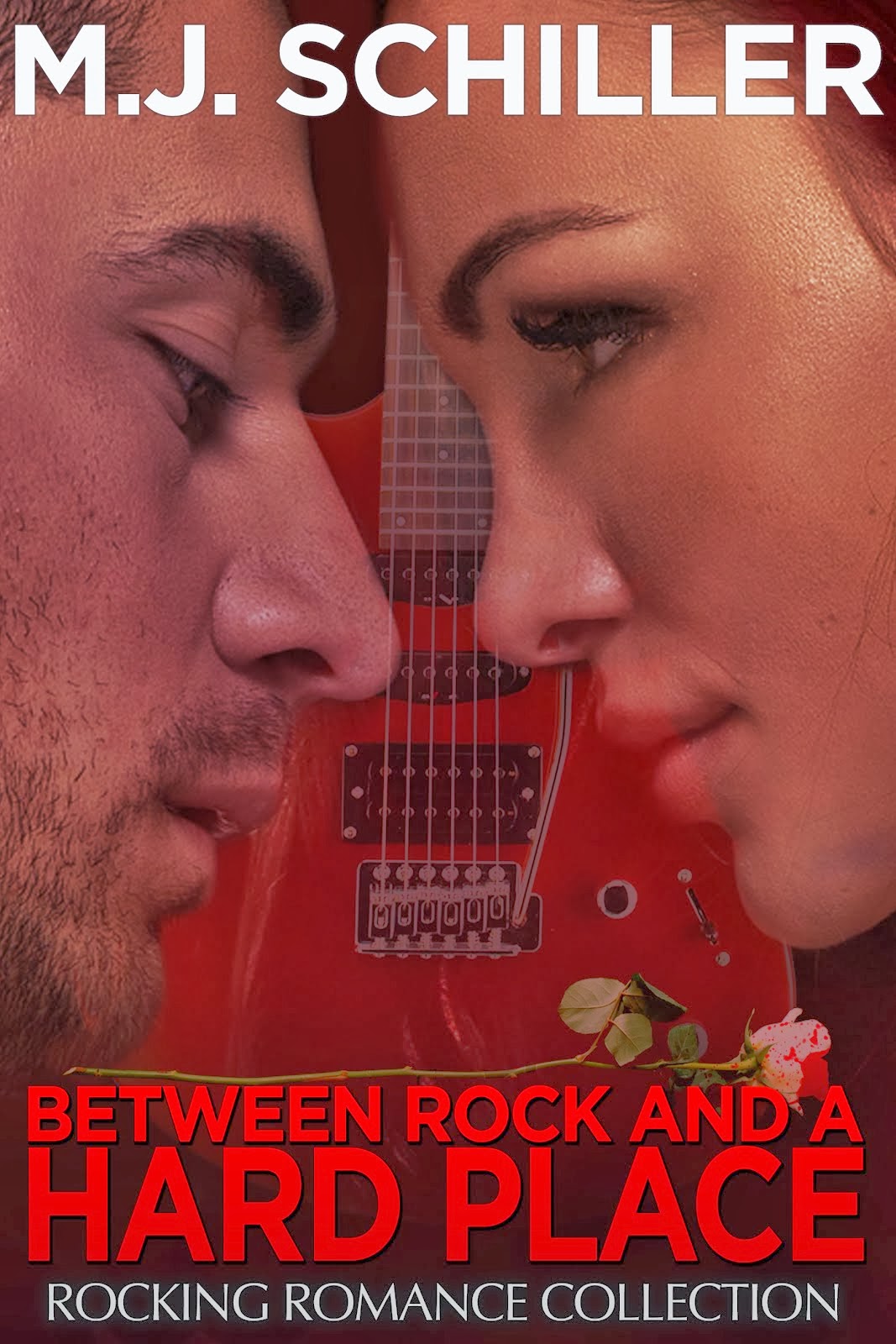 Heath “Hawk” McGowan is a young, single, cop and father. Jasmine Barrett is the rock star who has just discovered her best friend murdered in her own bed.  Jasmine, or “Jazz”, as her fans call her, is not at all what Heath expects when he first meets her. Anticipating having to work with a prima donna, he is surprised to find her sweet and completely unassuming, in addition to being as sexy as her onstage persona. After outlining a number of reasons why he shouldn’t become involved with her—the top reason being he is the lead investigator in the murder of her best friend—Heath finds that he can’t stop himself from falling in love.

Things heat up between the two, especially after Jazz discovers another body in the condominium’s garage, and her terror drives her closer to Heath. Will Heath be able to solve the murders before Jasmine becomes the next victim? Or will he save Jazz, while, at the same time, losing his heart to her?

When he finally hit the sidewalk, she was nowhere to be seen. He picked up his pace as he hurried up the stairs to the door of The Lofts. A bloodcurdling scream echoed from the parking garage to his left. Alarmed, he swung himself quickly over the railing of the steps, dropping the short distance onto the driveway of the garage. When he landed shockwaves radiate up his calves from his ankles, reminding him that he didn’t have tennis shoes on to cushion the drop.  He ignored the sting as he jerked on the doorknob to an entry to the right of the garage door. He tried several times, but the door was locked. He could hear more terrified screams from inside and now could easily identify Jasmine’s voice. Looking through the tiny glass window he saw only parked cars as he pounded on the door. “Jasmine!”

He ran back up the driveway, bounded up the steps and into the building. Upon reaching the elevators he pounded on the button, but when none of the doors slid open right away, he abandoned them. He ran down a short hallway, the sides of his coat flying behind him, and turned the corner, speeding to the end of another short hallway and through the door to the stairs. He took the steps two at a time and slid across the landing in his dress shoes. He barreled through the doorway and raced down the hall just as Jasmine ran around the corner in blind terror. He caught her by the waist as she tried to run past him and she began to flail at him like a demon, her hair covering her face.

“Let me go! Let me go!” The panic in her voice about undid him.

“What’s wrong? What happened? Are you okay?”

“What can’t, Jasmine? What happened?”

“Okay, okay,” he said urgently. Whatever it was, it wasn’t good. Thinking quickly, he walked her down to the elevators and pushed the button. To his relief, one opened right away. “You go in here, and when the doors close, you push the emergency button. Then you’ll be locked in there, safe. Got it, Jasmine?”

She nodded, her hair in front of her face again, and obediently got into the elevator. He watched her with his heart in his throat, while the doors closed. He pulled out his revolver. As the detective entered the garage, he heard the elevator alarm go off and felt a wave of relief which was turned back at the sight of Jasmine’s bloody footprints crossing the garage floor. Carefully, watching between vehicles, he made his way up to his car. He opened the door and reached in for the radio. “This is Lieutenant Heath McGowan requesting backup and a bus to The Lofts condominiums on Market Street. Copy.”

MJ is a lunch lady in the heart of Central Illinois. My gosh, can you get more folksy than that? She met her husband at the University of Missouri-Columbia and now she has an eighteen-year-old (how did that happen?) and sixteen year old triplets! She loves to read, karaoke (where she can pretend she is a rock star) and spends WAY too much time on Facebook. She grew up in St. Louis and still has family there.

You can buy BETWEEN ROCK AND A HARD PLACE at:

Be sure to enter the Rafflecopter giveaway below for your chance to win one of two e-copies of the first book in my ROCKING ROMANCE COLLECTION, TRAPPED UNDER ICE!

Good morning, Galen! Thanks for having me here today!

You are most welcome and stop by anytime!