Author, Rowena May O'Sullivan stopped by to talk about her new book, The Silver Rose. Welcome Rowena. 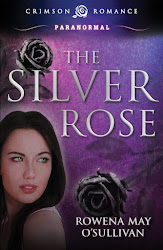 Thank you Galen for hosting me on your website today.

My name is Rowena May O’Sullivan and I’ve just released my very first book with Crimson Romance, a paranormal romance entitled, The Silver Rose. It’s been a long road getting here, but I’ve learned so much along the way and I’m so happy to see my work with a cover and available to purchase through Amazon, Barnes & Noble and iTunes as well as through Crimson Romance.

When I first started writing The Silver Rose, it was called The Bells of Marylebone. Why? Because I dreamed a book was delivered to my door in brown paper and when I unwrapped it, it was a copy of a book entitled The Bells of Marylebone. How strange I thought. What does that mean? I often trust my dreams as they’ve been known to come true or have hinted at a possible future.

I tend to write organically and the only idea I had at the beginning was the dream and the title.

Writing is a series of asking yourself, what if? I love paranormal romances so I knew my next book would have to include magic of some description. So after pondering on my dream I also looked to the meaning of the word bells and came up with “belles”. OK. The plural meant there would be more than one. Three sisters. What if they were witches? And what if the bells of Marylebone played a significant part in their lives? What if they tolled for witches so powerful and close to flaming out that they either had to sacrifice their magic or bind themselves to another to help balance that power? What if they failed to do either? Send the Dragons of Marylebone with their miniature dragons to hunt them down and burn the magic from them before their magic grows so powerful they turn rogue. Such an act will kill them.

Then Rosa, the eldest sister arrived in my thoughts with Aden, the hero, following not long after in the form of a warlock. I also wanted my story to be contemporary and in this world, living side by side with every day people. But Marylebone became the supreme ruling coven for all witches and warlocks and is located on another plane, virtually invisible to anyone other than those invited into its halls.

Most of the book is set in the small town of Raven’s Creek, a fictional town in New Zealand, but based on one that I used to visit a lot when my sister lived there. A small community where everyone knows your business and if they don’t they will do their best to find out.  A small community that cared for the sisters after their parents were killed in an auto-accident when they were mere teenagers.

As for the title –Aden, the hero – an immortal and several hundred years old is a jeweler. In the book, the silver rose was born from Aden’s painful past, which he has done his utmost to forget and atone for. But everything about Rosa, reminds him of his past and his vow to never love again is sorely tested when he discovers she possesses the rose he crafted for his Beloved who died in his arms four hundred years ago.

And then Rosa learns, that the man she has fallen for, is also the one who has been sent to kill her should she fail when the bells of Marylebone toll for her.

Gradually, the characters of Marylebone Coven, Raven’s Creek and Rosa’s sisters, Beth and Alanna, all powerful witches, arrived on the scene and I realized I had a trilogy. A story for each sister, each with her own trials to face.

As an aside, the subject of jewelry isn’t such a leap for me as I’d worked for a manufacturing jeweler for three years when I was 18-21 and, I realize now, some of the knowledge I learned about the processes of crafting jewelry stuck.  Plus, I’m a writer. I make stuff up!  There was a jeweler in the workroom where I worked, who was the most amazing artisan. He once crafted me as a surprise gift (when I was leaving the firm to travel to Europe for an extended period), a silver dolphin with sapphire eyes, just like the one Aden crafted and Rosa wears in the book.  It was the most beautiful gift. The sad thing is, I lost it while in Europe – I believe I lost it in a small Dutch town called Noordgouwe. I’ve never forgotten that loss and often wonder if anyone found it and is wearing it now.

Here’s an excerpt from The Silver Rose for you – Rosa’s first impressions of  Aden after his arrival in Raven’s Creek.

Rosa peered through the steam from her coffee and out the window to the stranger across the road. A number of expressions had crossed his far-too-handsome-for-his-own-good features. Shock, irritation, even a flash of awareness was quickly doused with an equal portion of anger. She immediately thought of the bells. Here was a man with huge potential. It swirled about him in a rainbow of color. A prickle of something she couldn’t define—warning, perhaps—skittered across the back of her neck, so she took a harder look, using her ability to read auras to divine what it was about him that made him so…different. She studied him as intently as he studied them but couldn’t find anything except an uncommonly large dose of impressive energy swirling about his auric field. As far as she could tell he wasn’t a warlock.

Beth came up to stand beside her. “Oh, my. He’s gorgeous!”

“‘Oh, my, is an understatement,” Alanna concurred as she too stared outwards before turning and narrowing an assessing gaze at Rosa. “You want him?”

Rosa spluttered into her coffee. “I certainly do not!”

Alanna shrugged. “Liar! Your aura’s gone ruby red. You fancy him like crazy.”

Ruby red! There was red in her aura? “Well, I can’t deny he’s attractive.”

“The master of understatement, as usual.” Alanna rolled her eyes. “If you don’t want him, I’ll take him!”

Rosa almost snorted. “You would!”

“Are you blind? Look at him! He’s juicy delicious.”

Alanna’s head rocked back and she laughed. “Damn right!”

Rosa gulped back a mouthful of coffee, scalding the roof of her mouth. She

immediately cooled it with a simple spell before the sensitive skin blistered. She was

hearing the bells again. She looked to Alanna and Beth. Had they heard them too? But no, they both laughed and studied the stranger, jostling each other’s arms as they debated the best description for him.

But Rosa was too intent as she felt a whisper of warning: He brings change… Beware!

The Silver Rose is available for purchase from:

I’m currently writing Alanna’s story, The Jade Dragon, which has just been contracted with Crimson Romance.  I don’t have a release date yet, but she’s proving to be an interesting character and Gregori, well, he’s quite delicious!

To learn more about me you can visit my website at www.rowenamayosullian.com

Once again, a very big thank you so much Galen for allowing me to post on your website today.