Today I'd like to introduce author, Traci McDonald. Welcome Traci, tell us about your book, KILLING CASANOVA 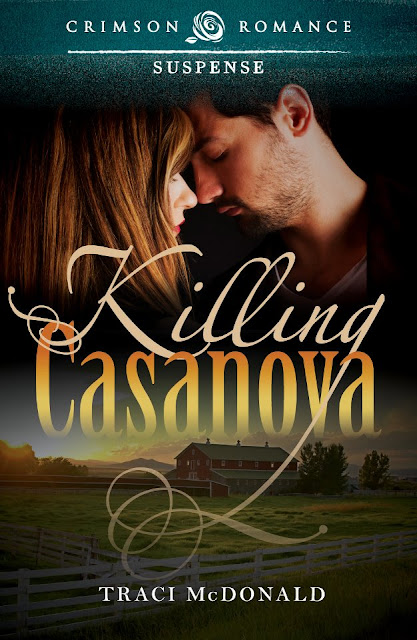 KILLING CASANOVA is the story of Jake Caswell and Cassie Taylor. Jake has a reputation for being the town’s local Casanova. Sexy, charming and gorgeous, women literally line up for a chance to be with him. Most women…but not Cassie. Cassie has a bitter past experience with men like Jake and her physical blindness makes it difficult for her to see the man Jake wants her to see. Their journey through healing, and heartache teaches them both the difference between true love and attraction. Throw in a deadly fire, an unhappy meeting with a rattlesnake and it’s an exciting ride.

Galen: What was the inspiration for Killing Casanova?

Traci: When I was in my twenties I lived back east and knew more than one Casanova. Most of these guys were good time charlies and I always ended up a little broken after dating them. Seventeen years ago I lost my eyesight and the way I looked at men completely changed because it was no longer about attraction to what I could see. There is a line from a Carrie Underwood song about a “Good Time Cowboy Casanova’ which says…”he’s the devil in disguise, he’s a snake with blue eyes.” When I heard that song I thought to myself There was a time in my life when I was a sucker for a ‘snake with blue eyes’ Thank God going blind saved me from ending up with one of those guys. And a story was born.

Galen: What’s your favorite line from one of your books?

Traci: The first time Cassie looks at Jake she has to touch his face. When she feels his five o’clock shadow she tells him his face looks like a baby pig. My favorite line is his response: “My face looks like a baby pig to you,” Jake said pulling her into his arms and tangling his fingers through her hair. “I can do better than that. The first time you ride a wild mustang; she is jittery, nervous. There is no time to think, you must wind your fingers through her mane and take her; like the wild thing she is.”

Galen: What started you on the road to writing romance?

Traci: I originally started trying to write for the young adult genre but soon discovered I wanted everyone to fall in love. Teenage love rubs me wrong, often it ends up in teenage pregnancy and that’s a whole can of worms I am not qualified to handle. So I took my characters and grew them up a little and had a lot more fun writing.

Galen: Are you a pantzer or plotter?

Traci: I am definitely a plotter. I hear something, or smell something or feel something and I get an idea for a story. It usually starts with a title,  and then characters from there.  I tell the story in my mind from beginning to end. When I sit down and write I follow my plotted line but every time I start down one road, my characters start telling the story themselves. When I finish my plot has flown by the seat of its pants but I started by plotting the whole thing.

Galen: Do you remember the first romance book you read? If so, who was the author? What made it stick with you?

Traci: The first romance I thought of as a romance was Hondo by Louis La’mour. Strange but Louis actually has elements of romance in most of his work. I have re-read Hondo multiple times and the more I read it the less romance I find. That is probably because I am looking for it more now though. It made such an impression on me that first time, because I was 12 years old and I read Louis La’mour with my dad, who was my best friend. The story of Hondo Lane is about a man who works a lonely part of the desert and accidently encounters a beautiful woman being harassed by Apaches. My starry eyed pre-teen mind saw a knight on his horse and a damsel in distress and I was hooked.

Galen: Did you sell the first book you wrote?

Traci: I have Four more finished manuscripts besides the one I sold to Crimson romance, but Killing Casanova is the first one I offered to a publisher for consideration. I have been writing poems, lyrics, short stories and novels on and off my entire life. Recently I had a kidney transplant and with a new lease on life making writing a career has finally become a goal I now have the time and strength to accomplish.

Galen: What are the three books you’d have if you were stranded on a deserted isle?

Traci: The Book of Mormon, Divergent, by Veronica Roth, and Jay Hawk, by Dorothy Keddington?

Traci: I read blogs every day but I don’t read the same two. I read Veronica Roth’s blog, Shannon Hale, Kiristin White, Writers Digest has lots of great blogs to read and I follow a few friends from Crimson Romance. I also check in with Pioneer Woman, Word Wranglers and of course Writing Blind.

Traci: One of the great benefits of being blind is the awesome technology available to the visually impaired. I have a desktop computer and a laptop that both talk to me. With my screen reading program JAWS I can work just about anywhere. My desktop is in a corner facing the wall because I don’t need to look at anything when I write. My laptop has a wireless keyboard that makes it so I can set the main part up in my kitchen and then work on the couch, or in bed or in the backyard if I want. It’s a great life.

Galen: Where would you like to travel to if you had to research an area?

Traci: I have already done this research. In the Caribbean there are a group of islands known as TheTurks and Caicos. The water is a crystal clear blue and you can see the white sand on the ocean floor. The average year round temperature is 78 degrees with all the lusciousness of an island paradise and the spectacular views of sand and sea. Next to Hawaii it sounds to me like the most beautiful place on the planet.

Galen: If you could have any other job, (not your current writing or day job) what would it be?

Traci: I would be a kicker in the NFL. Work once a week, wear the least amount of pads, and take the fewest hits. You can still make a million if you are good, and kickers have careers that last for more than twenty years.  A million bucks a year for twenty years sounds good to me, and I love football. I am an Eli Manning fan.

Galen: What do you do when you are not writing?

Traci: Where do I start? I have three boys between the ages of 8 and 13. Between football, soccer, scouts, gymnastics, church, and school, I barely have time to breathe. I do read, research family history, play co-ed softball with my husband, tandem bike ride and I am learning to read Braille.

Galen: Best and worst part of being a writer.

Traci: The best part of being a writer for me is the people. I love people I love to talk to them, I love to tell their stories and I love to write things that touch hearts and minds. People are fun, inspiring, humorous, sad and full of life. The good, the bad, and the dirty. I love filling my life with wonderful people and writing has opened my life up to so many great ones, that it has been worth it.

The worst part is the marketing. If I could write, talk, dream, learn and make friends along the way; it would be enough. Unfortunately in order to do all that you have to sell yourself and sometimes I feel like a harker at the circus. “Step right up folks…Watch the funny blind lady try to convince you to buy her books.”

Galen: What was the best piece of advice given to you?

Traci: Ever? or about writing? The best piece of writing advice I was ever given was given by Dorothey Keddington in a writers workshop. She said: “If you have a great idea but can’t figure out where to start writing, then think of it like picking up a wriggling puppy. Grasp it firmly around the middle and get it on its feet.” I think the best advice I have ever been given is: “It will all work out in the end: If it hasn’t worked out yet…then its not the end.”

You can find out more about Traci at the following links:

or view her BOOK TRAILER